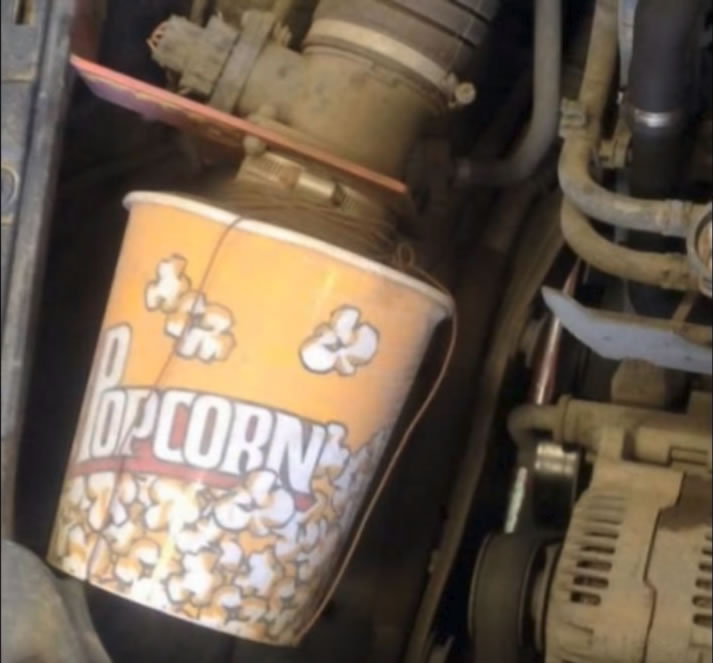 13 Weird Things Mechanics Have Found in Their Customer’s Cars

Sometimes mechanics have to get up close and personal with your vehicle to do their job. Although they don’t go out of their way to find the weird and unusual, occasionally they come across something that really surprises them. If you think old hamburger wrappers and sweaty gym clothes are bad, wait until you hear what these mechanics have found in their customer’s cars!

John Burkhauser is the director of education auto repair software producer Bolt on Technology. He recalls a Friday afternoon during a sweltering summer when a client dropped off a vehicle to be repaired over the weekend and picked up on Monday.

When she came to get her car, she was happy to find that it was fixed, but there was a horrendous smell coming from the inside of the car. She had left half of a plastic-wrapped watermelon in the back seat. The watermelon had baked in the car for days and become nothing more than a blob of wobbling brown liquid, ready to leak out all over the car at any moment.

2. Mattress Under the Car 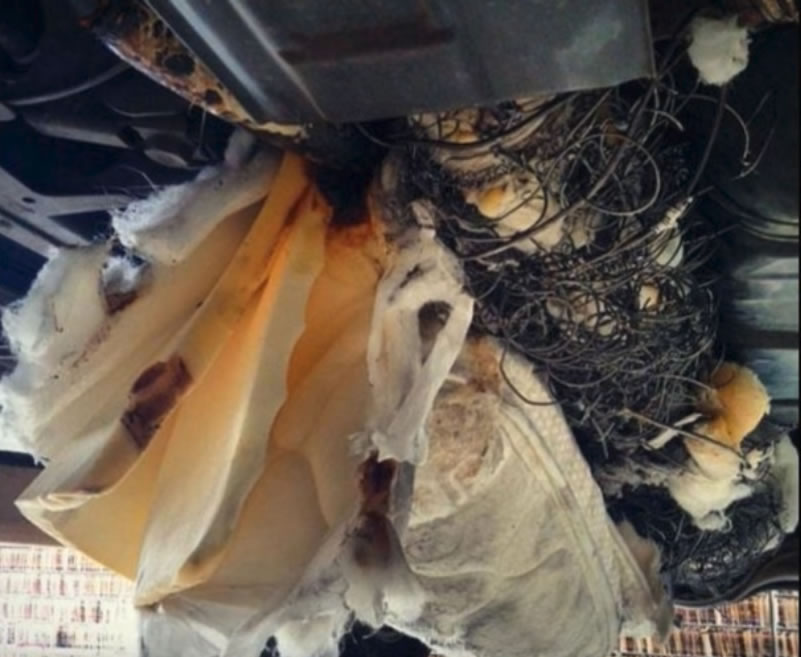 Eddie Kane, mechanic at Los Angeles auto shop Tadi Brothers, was installing a backup and parking sensor at a client’s home for an older gentleman who’s car had been sitting for a while. To install the sensor, he had to take off the bumper, and when he did, he heard a strange rattling sound. Upon further inspection, he discovered that the source of the rattle was a large stash of acorns. As he continued to work on the car, he found a second stash of acorns in the glove compartment. Suddenly, he noticed a big, fat squirrel looking on in dismay as his secret acorn stash was discovered.

Here’s another in a police officer’s car: 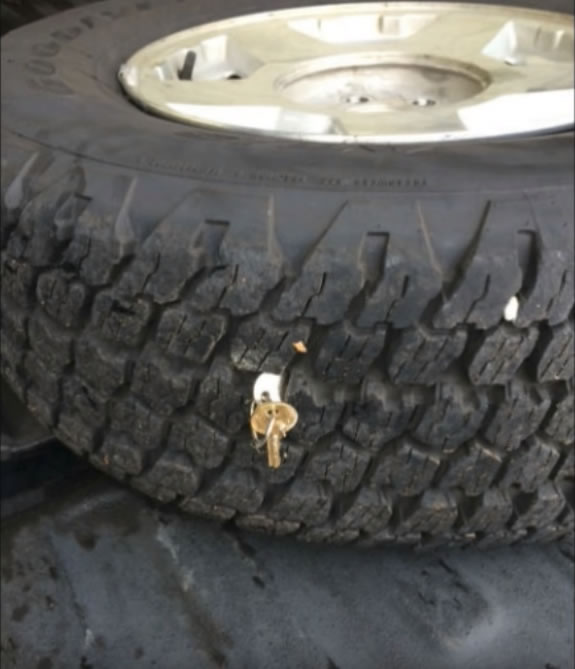 5. A Gift from the Factory

Paul Allen from Newark, New Jersey recalls a story his dad told him growing up. His dad owned an auto repair shop, and a client came to him complaining of a strange banging noise in his new 1963 Ford Galaxy. The noise only occurred at certain times, most often as he was pulling out of his driveway.

Paul’s dad drove the care to the customer’s house, and as he went up the steep driveway, he heard a strange sliding sound that ended with a loud thump coming from the driver’s side door. Driving the car back to his shop, Paul’s dad took off the door panel and discovered that one of the assembly line workers had left the client a gift inside the door. It was an empty, glass soda pop bottle. Paul returned the bottle for the deposit and called it even.

6. Lock on the Shifter 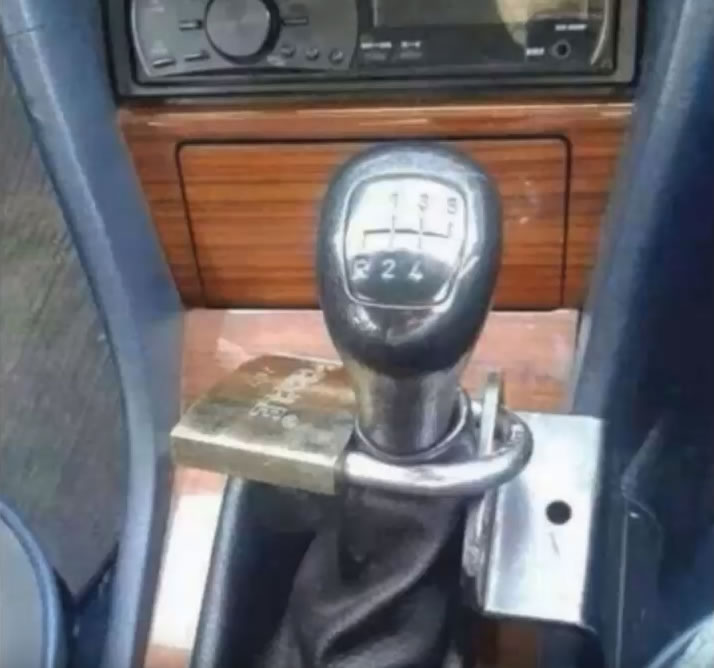 Most folks know that small animals like to crawl up into warm car engines when it’s cold out. But did you know that rats like to bring a snack with them, too? Brian Farkas of Hub Starters and Alternators in Malden, Massachusetts saw the evidence first hand.

One of the customers lived in a community with a large population of rats. Whenever the client brought his car in for repairs, he’d find a traveling buffet under the hood. The rats had left everything from candy bars to partially eaten pizza slices right on top of the engine.

9. Cow Bell Under the Car 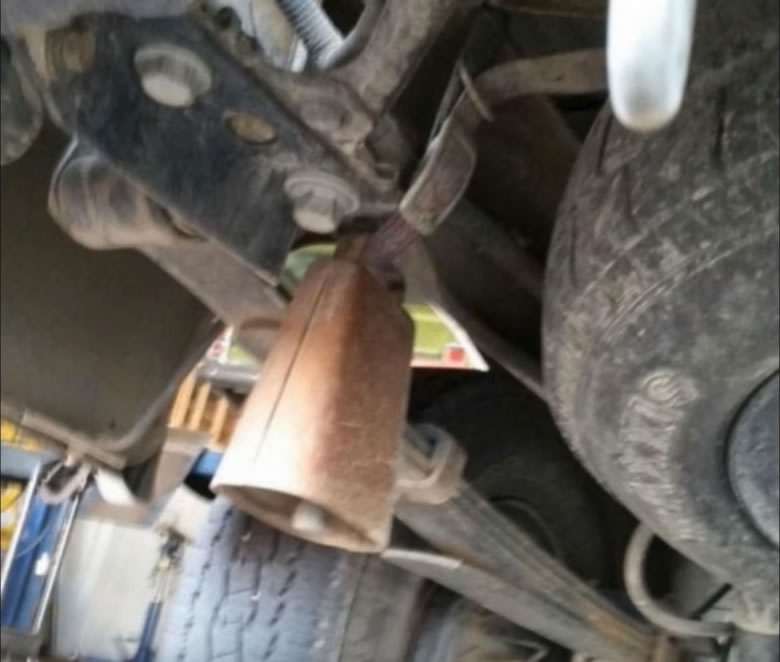 One auto repair shop had a client come in and ask how much it would cost to have them find his son’s missing snake. Apparently, the snake had gotten away from his son’s grasp on the way home from the pet store, and now the wife refused to get in the car, much less drive it anyway. The father had searched the car but couldn’t find the missing snake.

Employees systematically (and timidly) took the interior of the car apart, expecting to find the fugitive snake at every turn. After removing all the seats, carpet, interior trim, and even the center console, they still couldn’t find it. Finally, another technician offered to give it a try. After a bit of searching, he yelled and pointed out the runaway snake all coiled up on the inside of the floor ventilation duct.

11. Cardboard Box Around the Exhaust 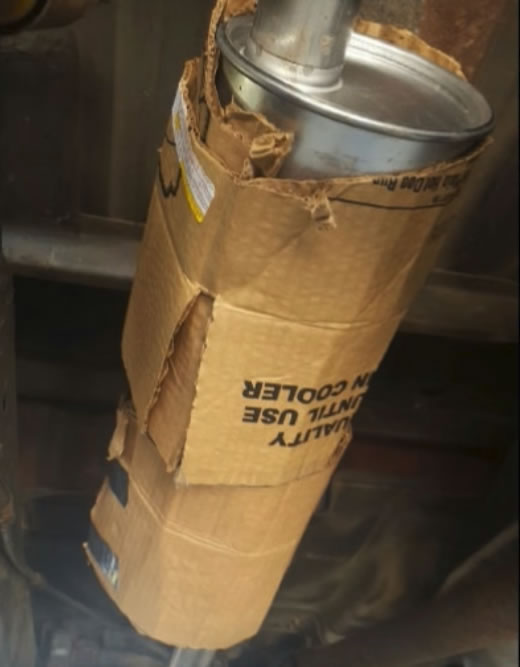 12. Cereal in the Cabin Filter 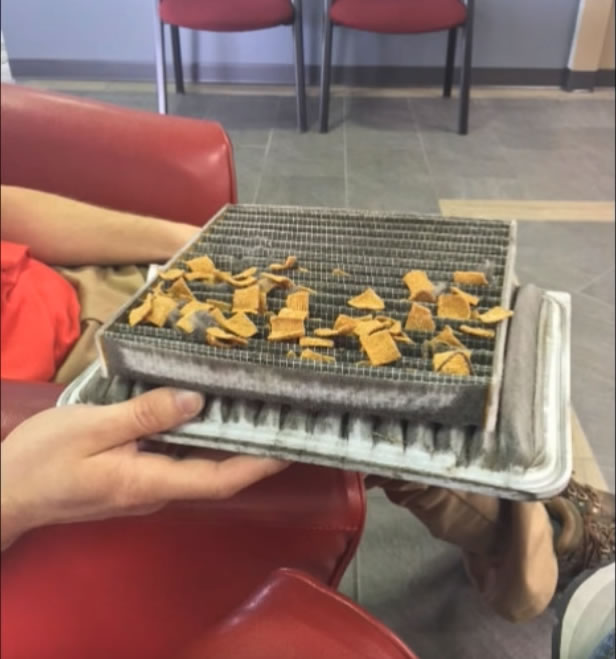 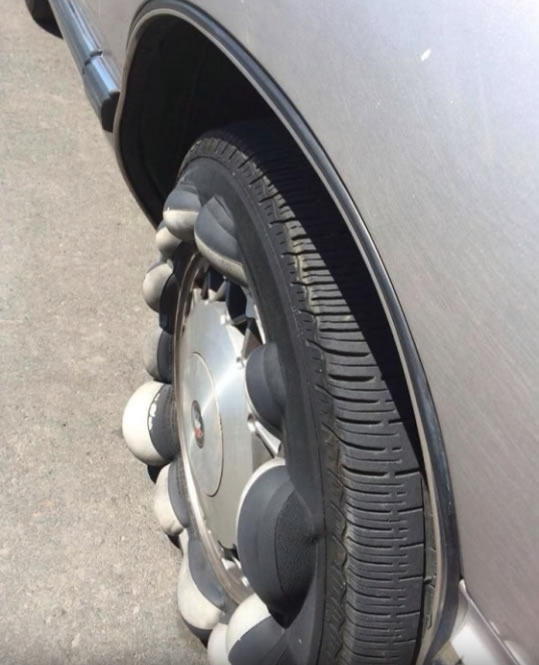 Ask any mechanic you know about the weird things they’ve found in their client’s cars, and you’re sure to get a long list. What have you left behind in your car for your mechanic to find?